As I wrote in earlier blog posts we will spend four days in this week at KTH, Stockholm. We spend those days in the visualization studio. Most of the time we spend at KTH the room will be used to attend lectures and do group work, but this particular day was quite different. Today, we got to try out all sorts of demoes and equipment in the studio as well as 3D-modelling and game development! At the end there was also a short lecture, by interaction designer and professor Jonas Löwgren from Linköping University. He talked about research through design and that e.g. physical artefacts can add something which cannot really be mediated through text and still images.

The first part of the day was devoted to the demoes, which we tried out after a short walkthrough by Björn Thuresson who is the manager of the studio. I will present some of the games briefly below, without going into technical details.

In the image above you can see a VR racing car game which is unusual in the way that it requires collaboration. The entire track, as well as a moving indicator showing the car’s position, can be seen on the table top screen. While the program is running, the person sitting in the chair with VR glasses and a steering wheel drives the car while at least one other person gives directions and makes sure that the holes in the track are filled with the square puzzle pieces! 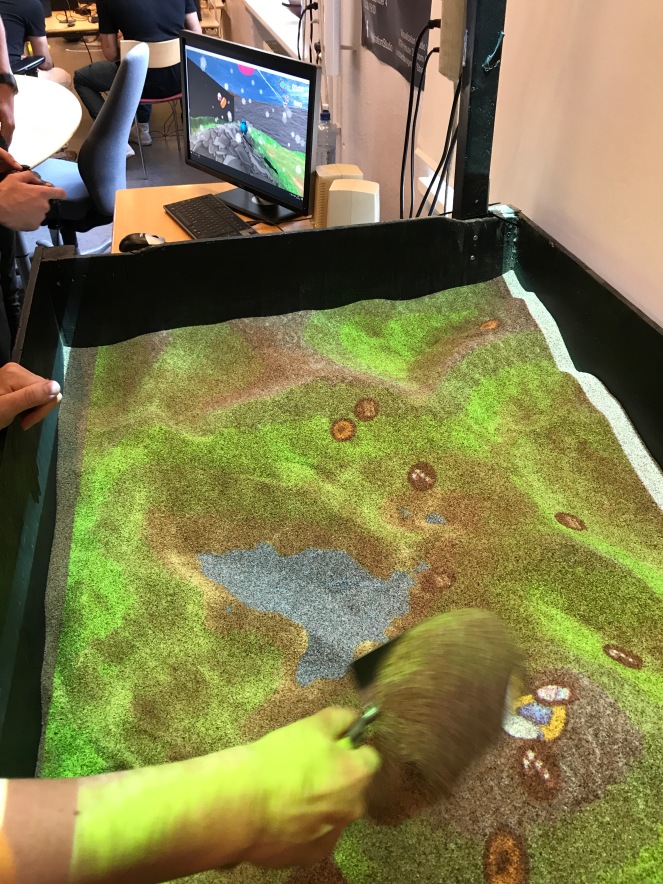 In the image above you can see another collaborative game. In this game you are controlling a little penguin and the task is to walk around and collect objects in the virtual world. In the world there are lakes (which you can drown in), fields and mountains. The main problem is that most of the objects cannot be reached unless you collaborate with someone who works in the sand box! There is a direct mapping between the topography in the sandbox and the one in the virtual world. If an object is too high up the one controlling the sand box need to start working in order to build up a mountain under the object.

My last example above shows my colleague from Uppsala University, Ida Löscher, trying to move around in a virtual world (seen on the big screen) collecting objects. The big problem here is that another person can place barriers (in the form of pillars) in the virtual world with the help of a mobile interface, where both the world and player moving around in the world are shown! Once again a multi-user interface, but this time it’s more like a competition.

These are just a few examples of the many things we got to try out. I really liked the collaborative aspect of the games and I think many interesting research ideas can be born here. All of the games were the result of student projects and I know that some of them have been awarded prices.

The next part was focused on 3D modelling. Robin Palmberg, a research engineer working in the studio,  introduced the concept whereafter he guided us through a tutorial where we tried out creating a small robot like character in Blender. At the end we could export the code for 3D-printing. The printed robots will be handed out on Friday! I actually understand Blender much better now.

Every group was guided by an expert KTH student! This was a very interesting experience and I really enjoyed seeing the end result which was a combination of the different groups’ work. It was a very hard game, where you should jump between different plarforms but the important thing is that the collaborative effort worked!

One thought on “EHealth summer school in Stockholm, day 3!”